The correct answer was given: tiffanibell71

The ocean tides are due to the gravitational force exerted by the Moon on the water of the oceans. When the Moon is facing the ocean, the water is attracted towards the Moon, and therefore the sea level rises, causing high tide.

The highest low tide was first measured on July 4, at 1.8 feet.

So, the tide has value zero 3.5 days before July 4, which means on July 1. Since the sine function is zero for t = 0, this means we should choose a sine.

The amplitude of a periodic function is the maximum displacement reached by the function relative to its equilibrium position.

- Average value of the function: 0.2 feet

This means that the maximum displacement of the function (and so, the amplitude) is:

The period of a periodic function is the time the function takes to complete one oscillation.

The period of a periodic function is also equivalent to twice the time the function takes to go from its maximum value to its minimum value.

- The maximum tide occurs on July 4

- The minimum tide occurs on July 11

So, the time between minimum and maximum is 7 days

Therefore, the period is twice this value:

Here it means the tide has a maximum (or a minimum) every 14 days.

The vertical shift of the function is the displacement of the average value from the position zero.

Here, we are told that the average of the tide during July is 0.2 feet.

This means that the vertical shift of the function is +0.2 feet (this represents the "zero value" of the sine function).

Here it means that when there is no tide, the value of the sea level is +0.2 feet

The phase shift of a periodic function corresponds to the horizontal shift of the function, i.e. the angle at which the function has its zero value.

The sine function can be written as

is the vertical shift

is the phase shift

Substituting all the values found so far, we find the expression for the function:

During this time, however, the tide crosses 2 times the zero-level (which is 0.2 feet) of the tide. This means that the tide is at the average height (0.2 feet) every 7 days.

So, starting from 0, the tide is at its average height on the following days:

The decimal value means "in the middle of the day".

There are various reasons for which the height recorded vary from the function created. 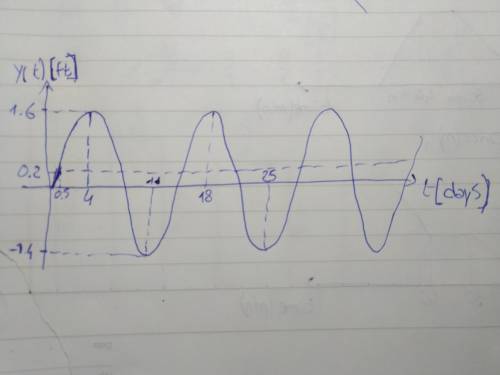 The correct answer was given: Dracopaul03

do they have answer choices?

The correct answer was given: aksatx4035

C: To model this function I would choose cosine because it's graph fits better with the cycle of the moon. It would start at the highest low tide, when the moon is new, and then the graph would go down steadily back to a full moon, where the lowest low tide is when when the moon is full (strongest gravitational pull).

D: The amplitude of the function would have to be around 1.3 because the function is like a line of best fit, and it would have to be close to the points (4, 1.8) and (11, -1.4), but not include them since they are in a way maximums and minimums and the graph has to fit along with the low and high low tides of the other days.

the dice has 6 sides and there is only one 5 in a dice.

∠acb is outside the circle and is 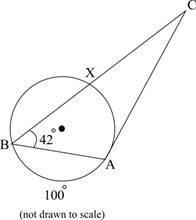 Mathematics, 21.06.2019 19:50, JAXKBOII55951
If the scale factor between two circles is 2x/5y what is the ratio of their areas? ​
Answers: 3
continue
Do you know the correct answer?
Throughout any given month, the maximum and minimum ocean tides follow a periodic pattern. last year...

Mathematics, 25.08.2020 20:01
Me ayudan es de mate porfa ...
Other tasks in the category: Mathematics More task
Total solved problems on the site: 14242963
Instant access to the answer in our app
And millions of other answers 4U without ads