During witch period did energy use increase exponentially

The correct answer was given: evalisezamot

B. The industrial revolution

The Industrial Revolution refers to the process of technological evolution experienced since the 18th century in Western Europe, between 1760 and 1850, establishing a new relationship between society and the environment, as well as enabling the existence of new forms of production that transformed the industrial sector, initiating a new consumption pattern. During this period the development of industrial machines grew, all powered by the constant use of energy. For this reason, we can say that the Industrial Revolution was the period when the use of energy increased exponentially.

This phase is marked especially by the replacement of energy produced by man with energies such as steam, wind and hydraulic; the substitution of artisanal production (manufacture) by industry (machining) and also by the existence of new labor relations.

The main inventions of this phase that changed the whole scenario experienced at the time were: the use of coal as an energy source; the consequent development of the steam engine and the locomotive. In this phase, the telegraph was also developed, one of the first means of almost instantaneous communication.

The correct answer was given: bnnn

During the Post-industrial agriculture and modern industrial period the energy consumption increased exponentially. It is so because new methods were formulated to run machines through the energy input which shall ease the work requiring human efforts.

After the industrial revolution, various kind of engines such as steam, diesel and electric engines were developed which required lot of energy for functioning adequately. Since the post industrial phase to till today, every aspects of our life is governed by some form of energy input.

the answer is a. at the equator

answer: good job it's all correct ! 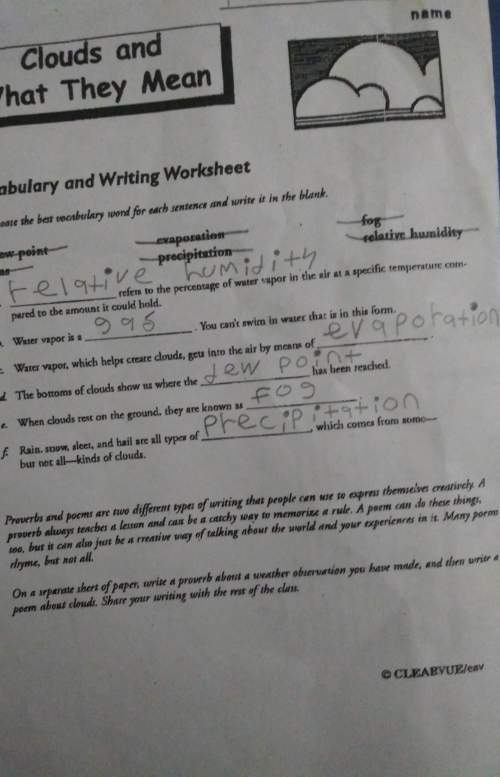 Physics, 22.06.2019 11:00, dragon2565
Looking at this barometer, is the air pressure high or low? what type of weather would you expect? high, bad low, bad high, good low, good
Answers: 1
continue
Do you know the correct answer?
During witch period did energy use increase exponentially...

History, 01.10.2019 20:00
How do the actors’ physical appearances affect their adaptations of hamlet? both actors appear to be well-groomed, which emphasizes the idea that hamlet has not fallen into madnes...

History, 01.10.2019 20:00
The use of local languages in medieval literature was most revolutionary because it reached a wider audience of people it led to italian becoming the primar...

Computers and Technology, 01.10.2019 20:00
Which statement is false? arrays may contain pointers. each entry in an array of strings is actually a pointer to the first character of a string. in c, a string is essentially a...

English, 01.10.2019 20:00
What is the direct object of the scentenc edna saw a rabbit in the flower patch...
Other tasks in the category: Physics More task
Total solved problems on the site: 8121190
Instant access to the answer in our app
And millions of other answers 4U without ads