What is the resultant of the vecotors shown? 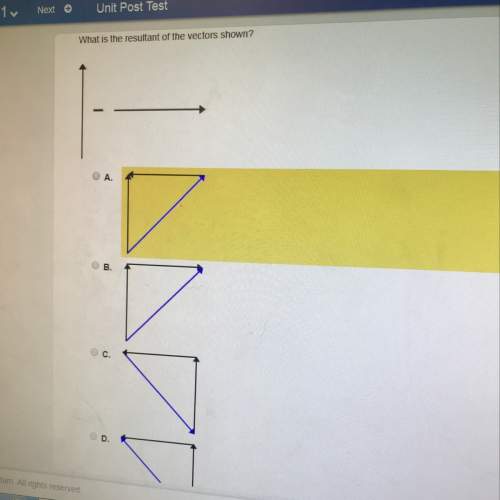 The correct answer was given: scm9170

D, I believe would be the first minus the second vector.

To solve this I named the first vector as A and the second as B.

A negative indicates a direction of a vector so if we flip the direction the other way we have the first vector (A) pointing vertically upwards and then vector B pointing to the west.

Now we have to use the head to tail method, meaning that the head of the first vector has to connect with the tail of the other vector added.

To add these two vectors, technically A - B, draw a line from the tail of A to the head of -B which would look like image D.

The correct answer was given: Brain
Multiply the 3 dimensions, assuming it is a rectangular cuboid, to get the volume in cm³ divide mass by volume to get density in g/cm³

Physics, 22.06.2019 05:30, salma1018
Imagine that someone pushes one marble toward a motionless marble. would there still be action-reaction forces involved in the collision? how might the marbles’ motions be changed? ?
Answers: 1
continue

Chemistry, 21.02.2020 18:54
4) Explain how two compounds in a mixture must be similar and/or different in order for hot filtration to be used as an effective method of separation of the two compounds....

English, 21.02.2020 18:54
Select the correct answer. According to Greek mythology, an encounter with a wild boar badly injured adonis while he was hunting. When his love, Aphrodite, arrived at the spot, she...